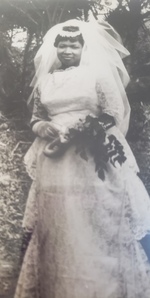 Dophynie Idona Carryl, affectionately known to her family and friends as Mignon, was called to heavenly rest on June 20, 2020. She was born in Queenstown Essequibo, Guyana, on October 1st 1926. She was the fourth of nine children; Gilbert aka Roland, Winslow aka George, deceased siblings: Allan, Winifred, Morel, Lionel aka Danford, Eldad aka Lingard, born to William and Ada James.
Mignon received her primary education at St. Bartholomew’s Anglican School in Queenstown. She worked as a devoted nurse attendant at Suddie Hospital, where she was well liked by her colleagues and patients. Mommy rode her bike 14 miles round trip to work everyday (3pm-11pm) in the dark, with no street lights, which was a testament to her strength. In 1965, she married Francis Woodrow Carryl and moved to Mckenzie, Linden. Together they formed a blended family made up of Francis Jr. (de-ceased), Lynette (deceased), Rudolph, Rolston, Leslyn, Owen, Clyde, Dawne and Ste-ve. Their union produced Michael, Angela and Nigel. In Linden, mommy continued her hard working ways. Along with her husband, she ran a general store. Her generosity was on full display as she frequently gave credit to many members of the community. Mommy's’ kindness had no end. If she could help, she did.
Mignon migrated to the US in 1981 where she worked many jobs to support her family. There was no sacrifice too great for her to make. She worked extremely long hours , 7 days a week to provide for her family. She often left herself without just so she could provide for her family. Being a mother was her pride and joy. Mommy would not rest until she knew her children were safe. Daily phone calls and check in was a norm.
She was an inspiration to all who knew her, and was a symbol of strength to her friends and family. Her faith and trust in God never wavered. She would always say I”m not afraid because everything is in God’s hands”. No matter where mommy went, she made friends and left a lasting impression. We were always amazed when we went shopping, the sales reps would greet her like a long lost friend. Mommy’s sharp wit and amazing memory was something to be admired. Her remarkable ability to recall events was impressive. Until the end mommy was still telling us stories and reminding us of past events. She had such a great sense of humor. One of her favorite past time was shopping. Mommy was a strategic shopper. She would first identify the item she wanted and patiently wait for it to go on sale. She would walk through every aisle of the supermarket to make sure she did not miss anything. She was proud of the fact that she never had a credit card, so she was never in debt. One of mommy’s favorite way to express herself was sucking her teeth. We all knew what that “suck teeth” meant. When it came to politics, you could not out politic mommy. She knew all the major players in politics and had an opinion on all of them. Mignon passed away peacefully on June 20th 2020, after her courageous battle with cancer.
She was a devoted wife to her late husband Francis Woodrow Carryl affection-ately known as Edgar. Left to cherish Mignon’s memory are her children; Rudolf, Rol-ston, Owen, Leslyn, Clyde, Dawne, Steve, Michael, Angela and Nigel; siblings, Gilbert and George; sister-in-law Prudence Gilbert; thirty-four (34) grandchildren, twenty-eight (28) great grandchildren; many nieces, nephews and a host of loving relatives and friends.

All rights reserved. This obituary is also archived at obittree.com