To share your memory on the wall of Dophynie Carryl, sign in using one of the following options:

To send flowers to the family or plant a tree in memory of Dophynie Idona "Mignon" Carryl, please visit our Heartfelt Sympathies Store.

Receive notifications about information and event scheduling for Dophynie

We encourage you to share your most beloved memories of Dophynie here, so that the family and other loved ones can always see it. You can upload cherished photographs, or share your favorite stories, and can even comment on those shared by others.

Posted Jul 03, 2020 at 02:07pm
Angela while I did no have the pleasure to know your Mom, Dophynie, she must have been the a very accomplished , lovely, kind woman, wife, mother and friend... and I am in awe at the her wonderful family legacy... she will not be forgotten... It was my honor to read her life story. This is a very sad time for you... my thoughts are with you. I am happy to celebrate her life with you and your family.
Blessings to all.
Jenny Holmes ,Dan and family
Comment Share
Share via:
ER

Posted Jul 03, 2020 at 10:37am
I would like to express my condolences to the Carryl’s family on the loss of your mom. please know that God is able to carry you through this period of grief and sorrow.
Comment Share
Share via:
DJ

Posted Jul 02, 2020 at 04:52pm
We pray the love of God enfolds you during your journey through grief. Much blessings. Deborrah Ann Johnson (Watson) and family

Posted Jul 02, 2020 at 09:12am
As we loved you so we miss you. In our memory you will always live, because of the beautiful memory you left behind. For in life, love and honor, in death remembrance.

Oscar James and sons. purchased the Your Light Shines and planted a memorial tree for the family of Dophynie Carryl. Send Flowers 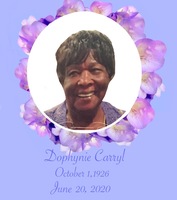